Summer 1966. At places like the Orlando Youth Center, Leesburg Armory, or the Coconut Teen Club, the scene is the same. Hundreds upon hundreds of teens are dancing to the beat stomped out by one or more of the top local bands. The group onstage may be the Rockin' Roadrunners or possibly Nation Rocking Shadows or Daytona's Allman Joys with Gregg and Duane Allman.

But for our purposes, the band in question is We The People, a group of long-haired high-schoolers whose latest single, "You Burn Me Up and Down," is getting mucho airplay on the city's biggest rock station, WLOF-AM. A fan favorite, the song contains all the classic garage rock ingredients: wild drums, buzzing fuzztone guitars, swirling electric organ, and a hormonally charged lead vocal by 16-year-old Tommy Talton that's a cocky hybrid of Jagger and Dylan. On Monday morning, the band members will be back in class, subject to being hassled by teachers about the length of their hair, but on the weekends, they are rock & roll stars.

Although they enjoyed only regional chart success in their time, We the People has come to be regarded as one of the finest "lost" bands of the '60s. This reputation is due primarily to the recordings they left behind on a handful of singles, both on RCA and on smaller labels like Gene Autry's Challenge (home of The Champs). The group also released two EPs on London Records' French subsidiary that compiled their U.S. singles and tacked on two otherwise unreleased tracks. With the 1985 inclusion of "Mirror of Your Mind" on the sixth volume of the highly influential Nuggets series, the word about We the People posthumously spread beyond Florida; the 2-CD, 40-track collection of We the People material released by Sundazed in 1998 cemented the group's stature as a band on par with '60s legends like the Music Machine or the Standells.

David Duff (guitarist/vocalist for We the People, the Nonchalants and the Offbeets): "[Sundazed] sent me a copy of the 'Mirror' CD, but I haven't listened to it. I should put it on sometime."

Jeff Lemlich (collector/historian): "We the People's 'The Mirror of Our Minds' is quite simply the finest '60s reissue, ever. Some of the greatest bands in history had one genius songwriter to guide them. We the People had two! Tommy Talton and Wayne Proctor were amazing. One moment the band could snarl and distort and create sonic anarchy, and then the next moment they could harmonize and play a minor chord ballad that could bring tears to my eyes."

A "supergroup" of sorts, We The People was created by manager Ron Dillman, a local rock & roll heavyweight (in more ways than one: at the time, he weighed over 350 pounds) who disbanded two groups to create a third, a new and improved model.

David Duff: "We the People was put together out of the parts of two bands, The Offbeets [from Winter Park, the group released one single, "Double Trouble"] and the Trademarks, who were from Leesburg [and also released one single, "Don't Say You Love Me Too"]. We used to practice at an auto parts store owned by [organist] Randy [Boyte]'s dad." 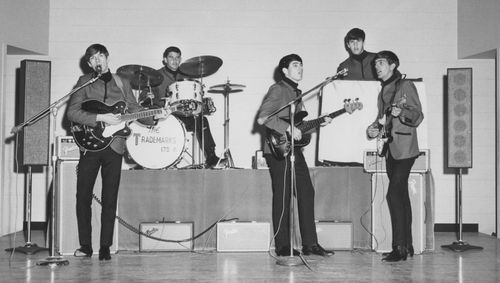 While the two forms of dance on display at modern-day rock shows are either the "stand-and-nod" or the general mayhem of moshing, back in these days, people actually danced to bands.

David Duff: "On the weekends, everybody would go the youth centers to dance. The better the band was, the more kids there'd be, and the more fun it would be. In '66, We the People set the attendance record at the Orlando Youth Center with fifteen or sixteen hundred kids."

Wayne Proctor (guitarist/vocalist, We the People, Trademarks): "If you knew what the Orlando Youth Center looked like, you'd think it was pretty impressive. The acoustics were great and it had a big, huge dance floor."

Eric T. Schabacker (Tener Records, Bee Jay Booking and Recording): "When I was with the Starfires and Little Willie and the Adolescents, the places to play were "WLOF Funtown" at the American Legion Hall, and, of course, the Orlando Youth Center, which had two different rooms. The main ballroom was for the younger teens, while the Witch's Hut was for the older ones. They didn't want the older kids corrupting the younger kids."

Ray Ehmen (owner, Rock & Roll Heaven): "In addition to the Youth Center and Armory shows, there was a lot of action at the Brittany Room and the Coconut Club."

David Duff: "There's hardly anything recognizable left. The building where the Orlando Youth Center used to be is still there, and I think the Winter Park Youth Center is now a women's shelter. All the youth centers here in town disappeared in the early '70s. I felt bad for the bands coming up after us, because they didn't have the same places to play." 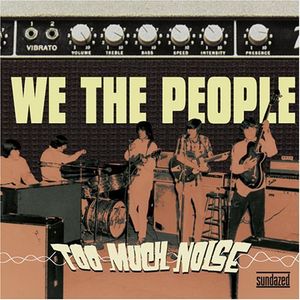 In late 1966, We the People released what many consider to be the band's finest recording, the two-sided local hit "In the Past" backed with "St. John's Shop." Local rock station WLOF-AM chose to feature the softer B-side over the more psychedelic A-side, pushing it all the way to number two on the local charts.

Ray Ehmen: "Bill Vermillion -- the 'Weird Beard' -- was the program director at WLOF. He picked the hits for the 'Funderful 40,' and a lot of local bands charted. That could never happen now."

Kurt Curtis (collector/historian/"King of the Oldies"): "We the People's recording of 'In The Past' is a masterpiece."

Mal Thursday (host, "Florida Rocks Again!"): "My favorite We the People track is 'When I Arrive,' from '68. It was a B-side on RCA. It's in a category by itself: 'Florida Freakbeat.'"

David Duff: "Florida was musically way ahead of its time. We'd go up to Nashville and they'd never seen guys with long hair and mod clothes. We blew their minds."

After putting out four killer singles in 1966, and getting some chart action elsewhere in the South We the People became a road machine, traveling hundreds of miles every weekend in support of their singles, playing teen centers, high school gyms, and the occasional larger venue.

David Duff: "We played to 40,000 kids in Louisville, on a bill with the Royal Guardsmen [also from Florida, a one-hit wonder with 'Snoopy vs. the Red Baron'], the Lemon Pipers, and the Buckinghams ... . Some nights, we'd be playing, I'd look at Tommy and we'd be connecting, and it would give you goose bumps. We knew when we were on, that it sounded good."

Ray Ehmen: "We the People were not the best musicians in town, nor did they have the best show. Noah's Ark smoked everyone live. But history has been rewritten because We the People made those great recordings with [Nashville-based producer] Tony Moon." [Note: Noah's Ark, from Tampa, released three singles, most notably the trippy, of-the-times "Love-In." Members would go on to work with other bands ranging from Atlanta Rhythm Section and The Outlaws to White Witch.] 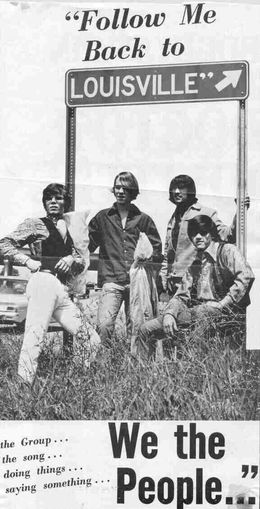 some locals insist there were other bands that were much better live, but more than 35 years later, it's the recordings that are left behind, and judging from those recordings, I truly believe We the People to be on par with bands such as Love or The Left Banke."

David Duff: "It was an adventure, I'll say that. You're young, on the road, what could be more fun?"

In early '67, with graduation -- and the draft -- looming, Proctor quit the band, while continuing to write songs for producer Tony Moon. His composition "Follow the Yellow Brick Road" was a minor hit for Nashville's The Lemonade Charade in 1968.

Wayne Proctor: "It seemed to have gotten nowhere. I was getting tired of playing and practicing for what seemed like nothing."

Ray Ehmen: "Wayne quit the band, and for a while he played tag with the military. But his back ended up getting him out of [the draft]. Tommy Talton left a year or so later, and went on to form the band Cowboy." [Note: Talton formed Cowboy with Scott Boyer, a former member of 31st of February, a Jacksonville band featuring Butch Trucks (later of the Allman Brothers Band) and Dave Brown (later of Santana) that released one album in 1969. 31st of February recorded a handful of tracks with Duane and Greg Allman after Hourglass broke up in 1970.]

The lineup was not the only thing that was changing. The summer of '67 brought with it Sgt. Pepper, as well as the heavy psychedelia of Jimi Hendrix and the San Francisco scene. The new music was at odds with We the People's pop-soul sound. The band soldiered on, with Carl Chambers taking Talton's place in the line-up, but the magic was gone.

Terry Cox: "I can almost pinpoint the day where everybody who was dancing around, jumping around, raising hell, packing the place, instead sat down on the floor and expected to hear 'In-a-Gadda-Da-Vida.'"

David Duff: "The mood changed. And it was a change for the worse. I can remember playing in Gainesville at the University of Florida. We go set up in one of the frat basements and play all night, and there'd be nobody in the room. Everybody was upstairs in their rooms, smoking dope and having sex. I liked it better when everybody danced." 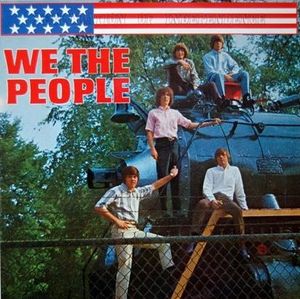 After five years, manager Ron Dillman decided to break up the band, left the music business and, according to David Duff, proceeded to lose 180 pounds. We the People's last job was a show on Halloween night 1970 that was a far cry from their legendary Halloween '66 rave-up at the Leesburg Armory.

David Duff: "After We the People split up [fall 1970], it was hard. I got a gig backing up strippers at Club One in Fern Park. Finally, I had to walk away from it. Music's like a drug. When the music was over for me, I had to stop listening to it. For years and years. I figured, if I can't do it, I don't want to hear it. Now I can listen, but for a long time, I couldn't. Sometimes I'll be listening to the oldies station, and a song we used to play will come on, and I go right back there, 35 years. I can almost taste the music."